My opportunity to work with the form 4’s is short.  They are already taking their mock KCSE exams.  Math has 2 papers, one on Monday and one on Thursday, so I planned to spend this Thursday and Friday nights at Esther’s, enabling me to be here for the evening study sessions.  As always I tell them they can come work with me or study something else.  Generally about ½ choose math.  Unfortunately it’s usually the wrong ½ —those who love math and are good at it.  Those who fear math don’t come — alas!  But last night (Thurs.) we kicked the stuffing out of derivatives.  My plan was to attack integrals Friday night, having spent the day making sure I could do the problems.  They don’t delve very deeply into calculus, but I do need to work them out ahead, consulting with other math teachers if necessary.  That’s the part that didn’t go according to plan.

Friday morning Esther told me she needed to take her 10-year old son to the district hospital to investigate a mysterious and painful swelling.  It’s a big bother to walk up to the road and wait for a matatu, particularly if you’re not feeling well, so I offered to take them.  Just as I was leaving, Jane Doe’s sister called to say that Jane had gone into labor.  Despite the administration of pitocin, she failed to dilate and an emergency cesarean was to be performed.

I got there just as they were about to put her on the gurney and was able to hold her hand.  She 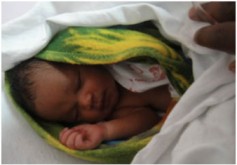 told me she was scared, but perhaps calmed a bit when I said my daughter had had 2 and she was fine.  I walked with her to the door of the surgery building, then had to sit on a very hard bench with no back.  After more than an hour, I boldly walked in the door and encountered a very sweet OB nurse.  I asked whether baby had been delivered and when I was told no, asked whether she would come tell us the sex as soon as she could.  Not too long later she stuck her head out the door and motioned for me to come in.  She looked so solemn that I feared there had been a complication, but no, she was enjoying the suspense before she revealed baby is a GIRL!!! Mom and baby were fine, she reported and I was beside myself with joy and relief.  Jane really wanted a girl.

I visited Jane last evening but she was in major pain, so I didn’t stay long.  Her sister is with her and is very sweet and comforting.  But this morning I visited and baby was with mom.  Here are the first photos of Guinevere.  Later I got a better photo of Gwen being held by yours truly. 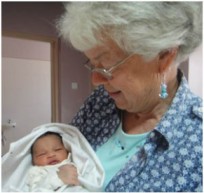 She is so fortunate to be in the new women’s section, opened just about 1 month.  It is beautiful, spacious, clean, light, and cheerful.  In the old maternity section, women were sometimes 3 to a bed, but here in the new one I saw no doubling up.  The nurses are friendly and helpful and even the food seems good.  In the old hospital, families had to bring food 3 times a day.

Here is Guinevere with Aunty Diana. 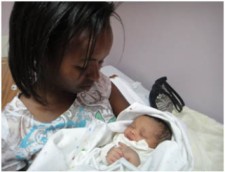 The women’s section was the brainchild of Cindy Burkland, a maternity nurse from the Midwest, Iowa, I think.  I met her several years ago when the construction was about ½ complete.  Several years before she had come to Naivasha with her husband who had a contract with Panda Flower Farms, one of 4 (out of 52) Fair Trade Flower Farms in the area.  She had toured the old hospital and was appalled by the conditions.  She approached Panda’s owner, who agreed to help fund the new building.  Cindy did a lot of fund-raising herself and the outcome is stunning, a real tribute to her determined hard work, dedication and warm heart for the women of this area.  Because it is part of the district hospital obstetric services are free, thanks to a recently enacted government policy to encourage women to give birth in hospitals.  Cindy has much to be proud of.

When I first went there, before the birth, I inquired whether Cindy was there.  At almost the same moment she came through a door, recognized me and welcomed me to the facility.  She put me in touch with the head nurse who was so helpful, even allowing me to see Jane briefly before she went for the surgery.  Jane had asked me to be with her during labor, but of course that wasn’t possible.

Back at SFG Friday evening, we worked on integration (calculus).  I had had only 1 hour to prepare and had encountered a problem I couldn’t complete.  We talked about the basic concepts they needed and then I presented this problem.  As I talked about it, it suddenly occurred to me what to do.  I was quite excited and proud of myself!  Calculus isn’t my field.  I could never tutor it at the level we do in US high schools, but I think I did OK at this level.

Here is the late-night crew, many wearing their Kenya Help hand knitted/crocheted scarves.

Kenya Help has no paid positions. Operating costs were approximately 3.3% of our 2013 budget. Learn how you can help us out.

END_OF_DOCUMENT_TOKEN_TO_BE_REPLACED

Our vision is an educated society. Our mission is to educate and train Kenyan women, children and youth, by providing resources and support.  A primary focus is scholarships for students at the secondary and post-secondary levels who need financial support. Many scholarship students attend St. Francis Xavier Secondary School for Girls in Naivasha, Kenya, the school built with Kenya Help funds. END_OF_DOCUMENT_TOKEN_TO_BE_REPLACED